Between the Kansas weather being beautiful today and a desire to not lock myself up in my room this weekend I decided to venture to the next Ghost Town on my list, Neosho Falls in Kansas. While it ended up being a two and a half hour drive, I feel that it was well worth the endevor.

A Brief History on Neosho Falls:

Neosho Falls was originally established in 1857 in Woodson county on the Neosho River and served for several years as the Woodson County seat. The river was obviously its namesake and the falls was added for the dam that was built by settlers at the time which is still present today. Over the course of it’s development it was home to 2 hotels, several mills, 2 banks, a jail and numerous businesses. Today it only has one business, a bar named the Oasis. While the town prospered for a while being on the railway ultimately several unfortunate events would doom the town to it’s current status as a ghost town. The depression which doomed many towns, as well as a flood in 1951 sealed Neosho Fall’s fate. At it’s peak the town was home to 1200 people, but today it is home to less than 140, it’s population having dipped by more than 20% since the 2000 census. Getting to Neosho falls took me a bit more than 2 hours from Fort Riley. Up until CR-666 everything was paved, you will only have to deal with about 4 mile’s worth of unpaved roadways. Furthermore there were plenty of gas stations along the way which was a plus!

Neosho Falls is pretty safe when it comes to exploring. At the time I visited the local residents had dogs out running about but they were all pretty friendly, residents and dogs included. The school which is really the only structure to truly explore was structurally sound as it is made out of solid concrete, just be sure you don’t fall out a window or anything. 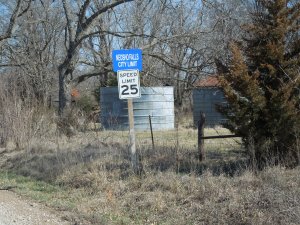 Almost everything you are going to want to see will be right there on Main Street of Neosho Falls. The only remaining business, The Oasis Tavern, the post office, the school, the old gas station, as well as a few other structures are all right there. Just off of Main Street is the bridge which you can see the Neosho River from, the dam, as well as the Power Station based off of the river. When it came to actually exploring structures, just as in Bushong, the school was the place to see. But where Bushong’s school was ripped apart and had nothing but garbage left in it, Neosho Falls’ school was relatively tidy (with the exception of the basement) and still had old woodwork, chairs, and speaker systems in it. Everything that is left of the school is concrete, and the entire place was structurally sound with the exception of the brick portions of the building which had collapsed. Still, it allowed me to venture up to the 3rd floor. But just as in Bushong, the school was really the only place to explore as everything else was relatively small/boarded up. 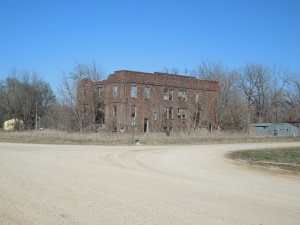 An old building on Main Street

The Neosho River and Power Station

A classroom on the second floor of the Neosho Falls school

A view from the 3rd floor of the Neosho Falls School

Once I was done in Neosho Falls I made sure to stop in a house I had seen about 10 minutes away near a greenhouse that was abandoned, and boy was I not disappointed! While the building is collapsing and the 2nd story is cut off, as well as the basement being flooded, the first floor was still accessible although a bit risky as a result of the floors having rotted. But inside the house much of the original furniture was left, a well as a television! I had heard that people had up and left their property following the flood in 1951 and this house appears to be an intact example of just what it looked like. If visiting Neosho Falls, you should be sure to check this place out! 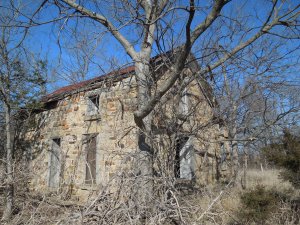 Neosho Falls is another place that I am going to have to take the time to come back and visit in the spring and summer. Where the growth is obvious on the red brick building, meandering through the school I saw that the ceilings and walls of the rooms had dead vines on them which probably makes this place an absolutely phenomenal sight in the Springtime.

A full set of the pictures from today is available on Facebook:

My tweets, not necessarily about exploring!